The firm has participated in the Supplier Capability - World Class Manufacturing (WCM) Programme of the Automotive Supply Chain Competitiveness Initiative (ASCCI – www.ascci.co.za). According to Sean Ellis of B&M Analysts, “ASCCI is a national non-profit initiative jointly established by government, industry and labour. It facilitates, coordinates and oversees supplier competitiveness improvement initiatives in the South African

In terms of Lumotech’s involvement in the WCM programme, Sean highlighted that, “The WCM programmes is focused on supporting the implementation of interventions amongst participating firms that will support them enhancing their competitiveness. The intervention identified for Lumotech was the introduction of an Overall Equipment Efficiency (OEE) solution. HaldanMES was selected as the service provider to support this.”

In 2016, HaldanMES was being used to monitor OEE information on 6 machines in Lumotech’s production facility. After turning on HaldanMES on 30 May 2016, Lumotech made steady improvements in their weekly OEE and have seen significant progress.

HaldanMES data from June 2016 revealed that the majority of Shopfloor losses were due to Maintenance, Training/Meetings and No Personnel. It was apparent that their team needed to focus on these issues.

Another challenge the data pointed out was the fact that operators were not taking ownership over their responsibility to input all downtime reason codes into the system. Neill Erickson, Manager of the Re-engineering Department at Lumotech, is part of the steering committee that was established to ensure a successful implementation process for the HaldanMES project. He began to drive the process and actively encouraged supervisors to become more involved in using the system on the shop floor. A culture change gained momentum throughout the company, and operators ensured that data collection became central to their daily roles. 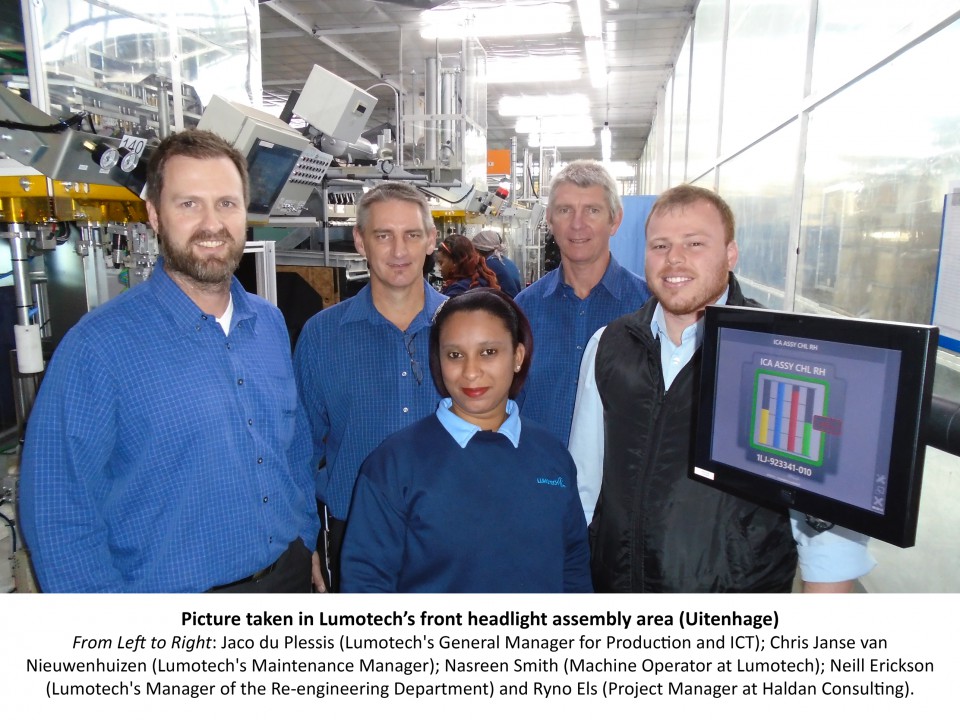 As Neill is also a TPM Leader at Lumotech, he was able to propel focussed continuous improvements. Detailed graphs and reports that are accessible in HaldanMES form a vital part of Neill’s ability to track the results, as they reveal the key improvements that were implemented through the TPM initiatives.

By July 2016, the data indicated that the team had managed to drastically reduce the most prominent downtime reasons. The main reasons for downtime now included break times, change overs and stops due to in-line processes slowing down.

“The main advantages we have gained since implementing HaldanMES’s OEE system at Lumotech is that all data collection is centralised and real-time. This provides immediate visibility of availability, production performance and quality issues to the shop floor. Detailed Pareto charts are readily available and allows us to identify challenges and prioritise our resources to achieve the best and quickest results.”– Jaco du Plessis, General Manager for Production and ICT. Jaco is also a member of the project steering committee.

Ryno Els, a Project Manager at Haldan Consulting, explains the importance of what he has saw occur at Lumotech’s during his time working with them:
“Lumotech is a shining example of why we do what we do at Haldan Consulting. We want customers to be forward-thinking, prominent global competitors – by visualising waste, eliminating it and maximising productivity. We are very excited about what Lumotech has been able to accomplish in such a short period of time.”

Haldan Consulting was once again selected as a preferred supplier of production monitoring software for Lumotech, under the ASCCI World Class Manufacturing programme.

In September 2017, Lumotech extended its OEE project across its assembly and manufacturing processes for automotive Head lamps and Tail lamps, to include the measurement of OEE and downtime on 7 additional machines in their Uitenhage facility. This will bring the total machines measured to 20.

“Following a second benchmark conducted at Lumotech, which was delivered under the combined auspices of the South African Automotive Benchmarking Club (SAABC) and the Automotive Supply Chain Competitiveness Initiative (ASCCI), the outcome indicated that the firm would benefit from the further enhancement of its existing OEE systems. HaldanMES was again chosen as the preferred service provider building on the previously successful implementation of production monitoring software by them.”

In addition, Haldan Consulting was selected because of their proven track record as a local supplier of software, and their expertise in machine efficiencies and lean manufacturing techniques. Other important factors included their ability to provide effective training, guidance and support.

The continuation of this OEE Project will ensure that there is better root cause analysis for downtimes and scrap rates on these machines, allowing for effective corrective actions to be made. This will further increase Lumotech’s machine uptime throughout its manufacturing processes, and will assist them in improving their bottom-line. 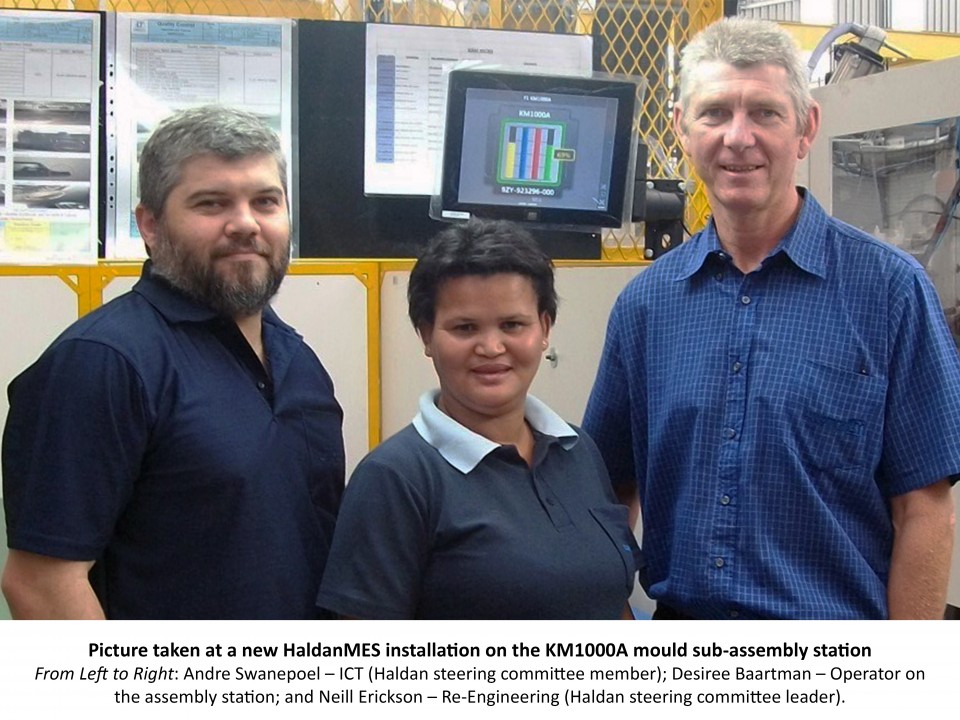 In 2018, Lumotech put together multi-disciplinary improvement teams who meet each day to discuss continuous improvements on different assembly production lines.

These teams meet for 30 minutes each Monday through Wednesday to ensure that they identify areas for improvement and follow up on any progress made. Operators are also involved in these meetings so that they can share more information about important problems that they might have seen occurring on the lines. This allows them to immediately put plans together to resolve them.

During these meetings, they look at Period Reports to see OEE information from the previous week and analyse whether any improvements were made on specific lines. They use availability graphs to identify what the major stoppages were for the week. Once a reoccurring issue is highlighted, they add it to their action plan and escalate it to the relevant person or department. Downtime is also analysed to determine whether their maintenance department is achieving their target (or maximum duration limit for any downtime) per shift per line, which is 12.5 minutes. Scrap rates for the previous week are examined to establish whether it is operator, machine or supplier scrap so that they can allocate it to the relevant department to action.

Once all of this is defined, a general action plan list is drawn up and agreed to. They use these weekly action plans to email teams and stay up to date on important issues that need to be addressed on a weekly basis. 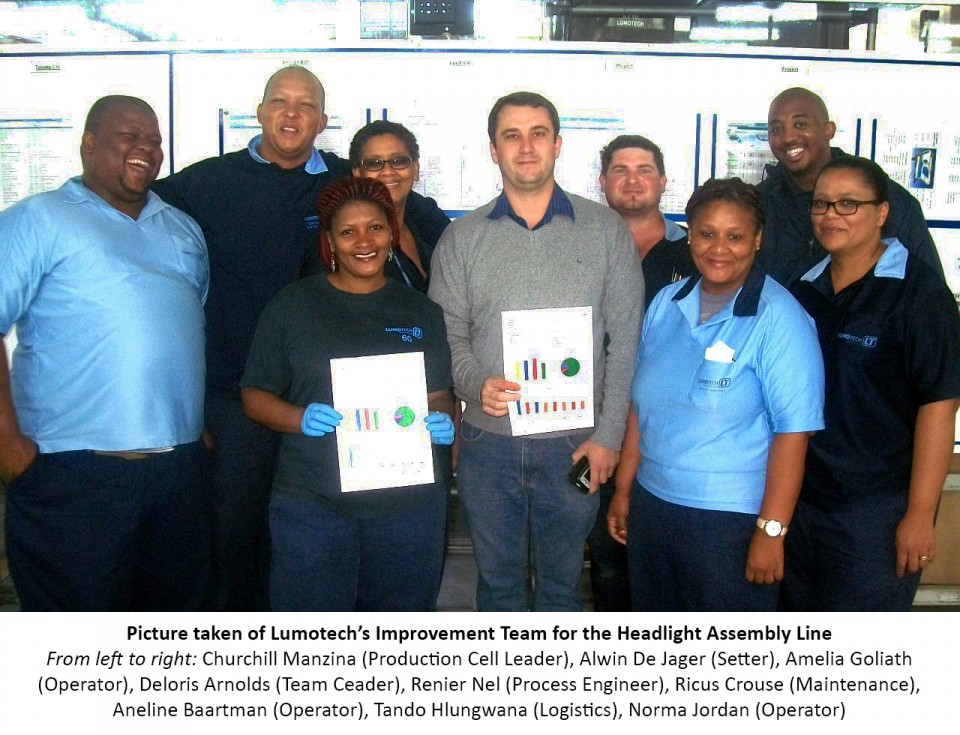